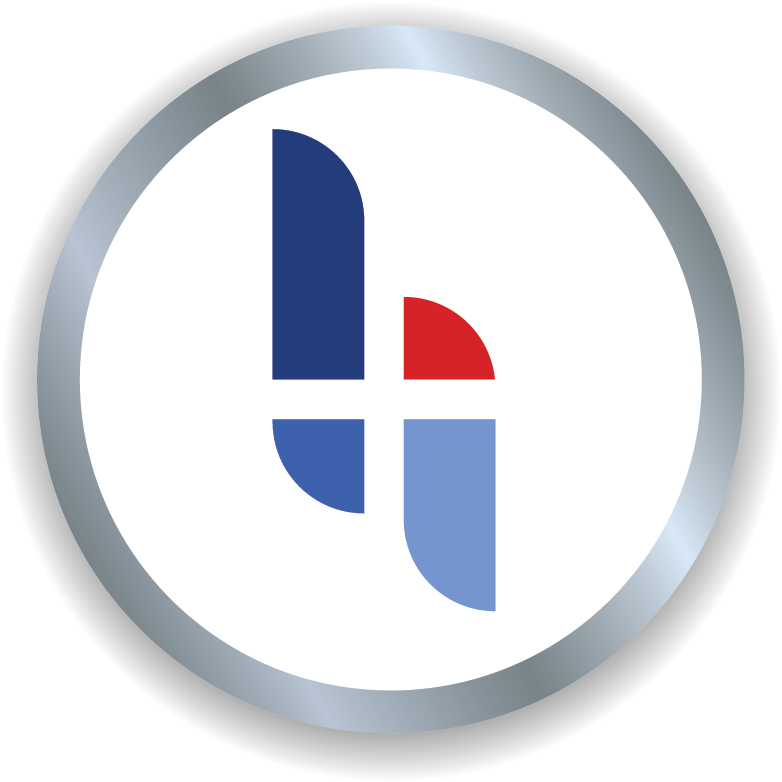 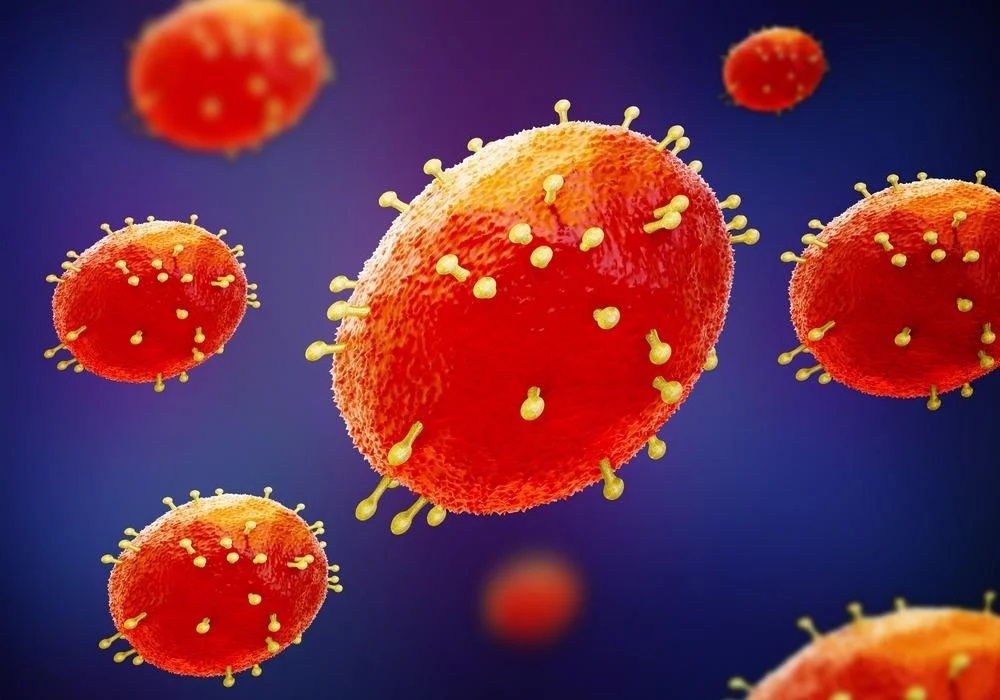 Since May 13, at least 1,400 confirmed cases of monkeypox have been recorded in 33 countries, including 48 total in 16 states in the United States and the District of Columbia, according to the Centers for Disease Control and Prevention (CDC). 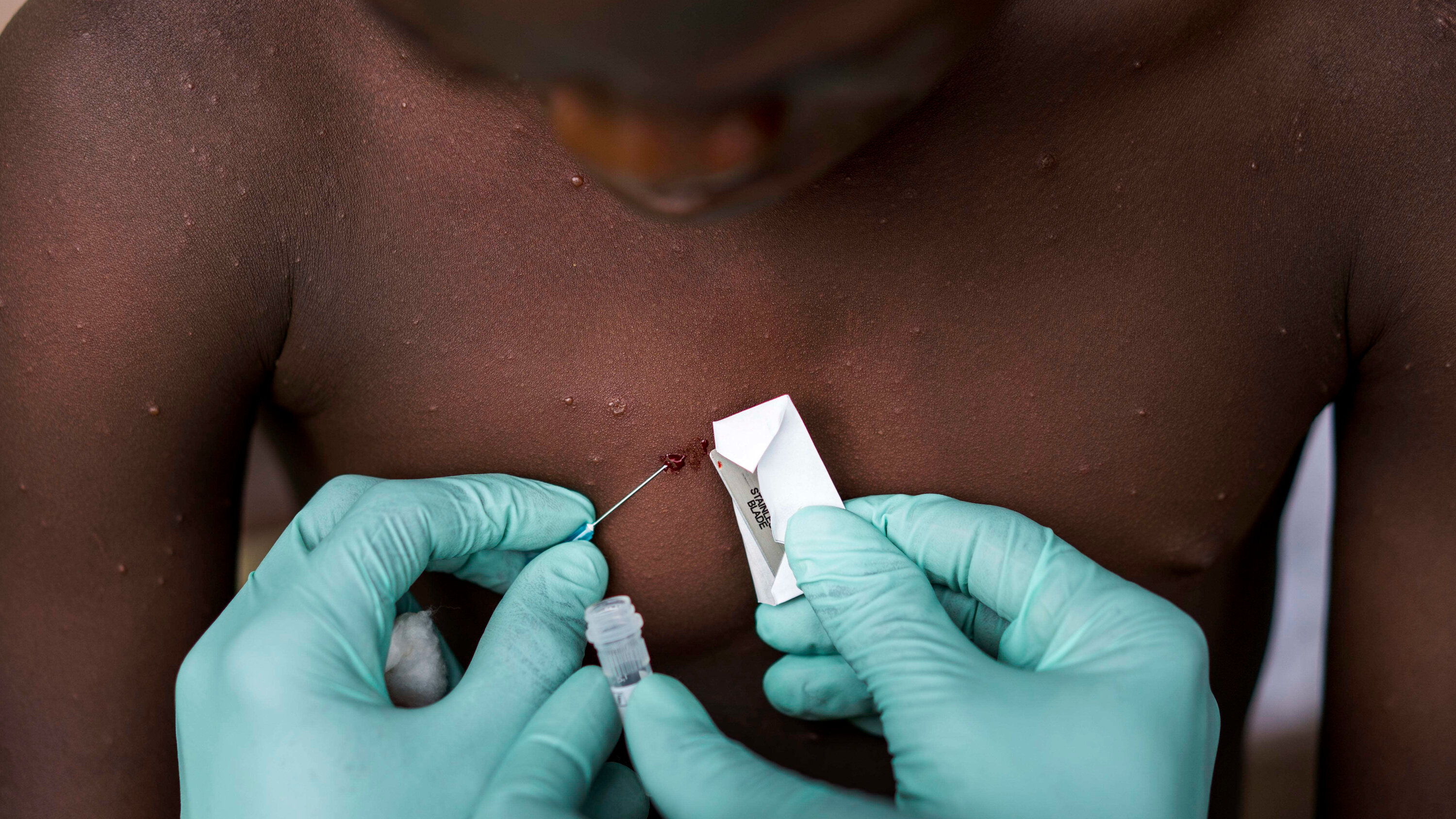 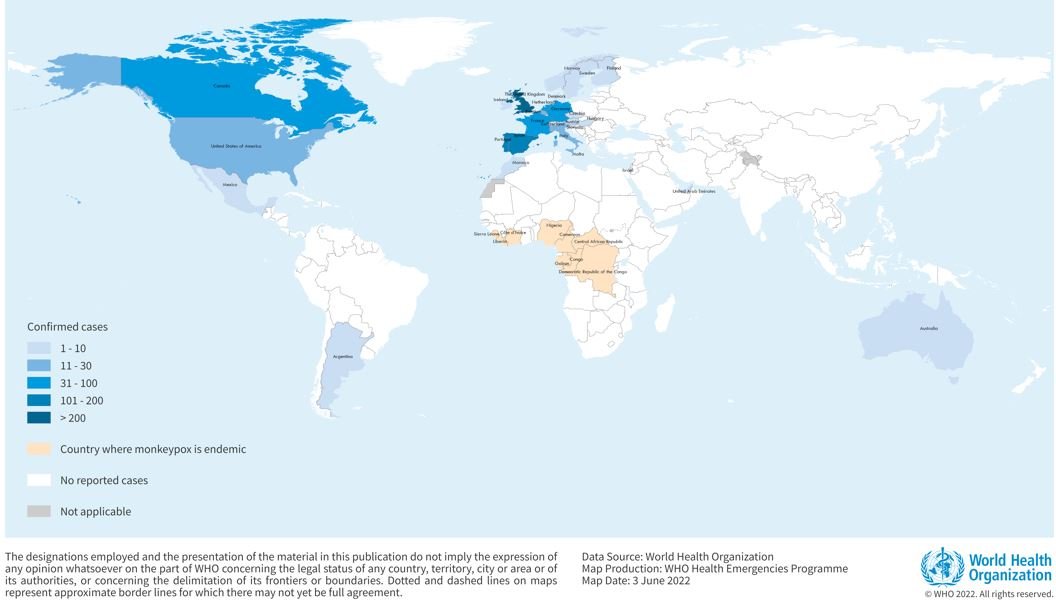 Since May 13, at least 1,400 confirmed cases of monkeypox have been recorded in 33 countries, including 48 total in 16 states in the United States and the District of Columbia, according to the Centers for Disease Control and Prevention (CDC). On June 10, CNN learned that the U.S. military had identified the first case in a service member, in Germany.

The disease has the potential to cause serious illness, but no deaths have been reported so far.

Although the World Health Organization (WHO) has stressed that the general public is highly unlikely to get monkeypox, the international health agency is now pushing countries to act immediately and do everything possible to slow the transmission of this life-threatening disease.

In a media briefing June 8, the WHO's director-general, Tedros Adhanom Ghebreyesus, PhD, warned that the risk that monkeypox could become established in nonendemic countries (outside of Africa, where it originated) is real. The WHO is particularly concerned about the risks of this virus for vulnerable groups, including children and pregnant women.

“That scenario can be prevented,” said Dr. Ghebreyesus. “The WHO urges affected countries to make every effort to identify all cases and contacts to control this outbreak and prevent onward spread.”

The WHO called the situation “unusual” because this is the first time that monkeypox cases and clusters are being reported in widely different areas that have little or no association with West or Central Africa, where the disease primarily occurs.

“This is a very, very unusual infection in the United States and in the developed world,” said William Schaffner, MD, an infectious-disease specialist and a professor of preventive medicine and health policy at the Vanderbilt University School of Medicine in Nashville, Tennessee. “Monkeypox virus lives in Africa, in a variety of different rodents, but occasionally gets into primates, such as monkeys, and hence the name, monkeypox.”

The WHO warned that the public health risk could become high if the virus spreads to groups at higher risk of severe disease, such as young children and immunosuppressed persons. The CDC has raised its travel health alert on monkeypox to “level 2 — practice enhanced precautions.” The health agency is also on the lookout for mutations — scientists recently found that two genetically distinct monkeypox variants are circulating in the United States.

Learn the Symptoms and Prevent Transmission

In a recent news conference, the CDC's director, Rochelle Walensky, encouraged all Americans to get educated about this disease, including how to prevent it, its symptoms, and how to get tested.

Monkeypox cases in this outbreak have been mainly reported among men who have sex with men (MSM). UK health services are advising individuals, particularly those who are gay, bisexual, or other men who have sex with men, to be on the lookout for unusual rashes or lesions on any part of their body, especially their genitalia, and to contact a sexual health service if they have concerns.

“The classic presentation that we’ve seen in the past is that the rash first appears on the head or neck and then progresses in what's called a centrifugal pattern. It leaves the center and it goes to hands, limbs, arms, legs, and soles of the feet,” said Rosamund Lewis, the technical lead for WHO’s monkeypox program in a YouTube webinar. Lesions then progress to the trunk and the genital area.

The lesions themselves start as a macule (a slight red patch on the skin). They then advance to papules, which are raised firm bumps on the skin. And finally they become vesicles, which are like blisters, with fluid inside.

The CDC warns that anyone, regardless of sexual orientation, can spread monkeypox through contact with body fluids, monkeypox sores, or shared items (such as clothing and bedding) that have been contaminated by the fluids or sores of a person with monkeypox.

The virus can also transmit between people through respiratory droplets in a close setting, such as the same household or a healthcare environment. Common household disinfectants can kill the virus.

“Monkeypox is not thought to linger in the air and is not typically transmitted during short periods of shared airspace,” Walensky told reporters. “The virus is not thought to spread through interactions such as having a casual conversation, passing in the grocery store, or touching the same items, such as the doorknob.”

Andy Seale, the strategies adviser at WHO’s department of sexually transmitted infections programs, emphasized that people should still go out and enjoy LGBTQ+ pride parades this summer, because they don’t pose an enhanced likelihood of transmission, Reuters reported.

Healthcare Workers Are on the Alert

Since a man in Massachusetts tested positive for monkeypox on May 18, the CDC has urged healthcare providers in the United States to be on the alert for patients who have rash illnesses consistent with the virus, regardless of whether they have traveled or have specific risk factors for monkeypox.

While the virus does not spread easily among people and the risk remains low, Inger Damon, MD, PhD, a poxvirus expert with more than 20 years of experience, said in a statement, “We’re asking the public to contact their healthcare provider if they have a new rash and are concerned about monkeypox.”

Medical providers can test patients and definitively determine if a patient has monkeypox.

Vaccinations for Some Medical Staff

Healthcare workers who may have come in contact with a monkeypox patient are also urged to be cautious. The Boston Globe reported on May 26 that Massachusetts General Hospital began giving the Jynneos monkeypox vaccine to some employees who may have been in close contact with a patient who was diagnosed with the virus. The patient was hospitalized in an airborne infection isolation room and was released on May 20.

Past data from Africa suggests that the smallpox vaccine is at least 85 percent effective in preventing monkeypox, according to the CDC. A monkeypox outbreak in the United States would most likely be controlled with smallpox vaccine, antivirals, and vaccinia immune globulin (a treatment made from blood containing antibodies).

Dr. Schaffner says that the smallpox vaccine has “a degree of effectiveness” against monkeypox, but large-scale studies have not been done. He expects the best way to control the spread will be by identifying those with the illness and isolating them.

Administering the smallpox vaccine on a wide scale would pose many challenges, he adds.

“Smallpox vaccine is not administered by a needle and syringe — it's administered by a multiple puncture method,” said Schaffner. “It requires training in order to do that. We would have to train a whole bunch of people to administer this vaccine appropriately.”

President Joe Biden has urged Americans to “be careful,” adding that the smallpox vaccine is effective against this infection, and the United States has enough vaccine “to deal with the likelihood of a problem,” reported Kaiser Health News.

The WHO does not recommend mass vaccination against monkeypox.

“In the few places where vaccines are available, they are being used to protect those who may be exposed, such as health workers and laboratory personnel,” said Ghebreyesus.

Monkeypox numbers have been mounting recently, and Schaffner believes we will see more cases in the weeks ahead. The United Kingdom currently has the largest outbreak, with at least 366 cases as of June 7, followed by Spain (275), and Portugal (209).

The United Kingdom is one of several countries that has bought doses (20,000) of Bavarian Nordic’s smallpox vaccine (Imvanex), which is offered to identified close contacts of those diagnosed with monkeypox to reduce the risk of symptomatic infection and severe illness.

While the risk of the virus infecting a household pet is considered low, British health authorities are on the alert for any possible cases, and they are advising infected individuals to avoid contact with their pets.

It’s Possible to Get the Illness From Animals

Following that outbreak, the United States did not see any cases until last year, when Texas and Maryland each identified an infected person who had recently traveled to Nigeria.

Symptoms to Watch For

While rare, monkeypox (which is in the Orthopox family of viruses) has the potential to cause serious viral illness. It typically begins with flu-like symptoms (fever, headaches, muscle ache, chills, exhaustion) along with swelling of the lymph nodes. The illness then progresses to an itchy rash on the face and body — often noticeable on the palms of the hands and soles of the feet.

“The rash is initially just red blotches, but then they coalesce in blisters that fill with pus,” says Schaffner. “They're really quite rubbery and firm; they're not like the thin-walled blisters that we may be more familiar with. The fatality rate, however, is pretty low — around 10 percent.”

People Who Should Be Especially Careful

The Massachusetts Department of Public Health says people may want to consult a physician about the possibility of monkeypox if they: 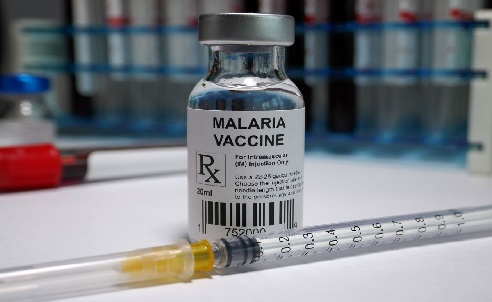 Malaria vaccine reaches more than one million children in Africa

More than one million children in Ghana, Kenya and Malawi have now received at least one dose of the first malaria vaccine. Data provided by the UN's World Health Organisation suggests that the pilot programme launched in April 2019 was safe and "substantially reduced severe cases" of the disease.

Service and providing the potential clients and customers with testimonials is one of the best ways to market.

Stay connect to us

Do you think you have some information worth sharing? Send them, we’d love to help publish them.

Your opinion matters to us. We would love to know what you think about our blogs.

Stay up-to-date with our latest products and services.

Thank you! Your submission has been received!
Oops! Something went wrong while submitting the form.